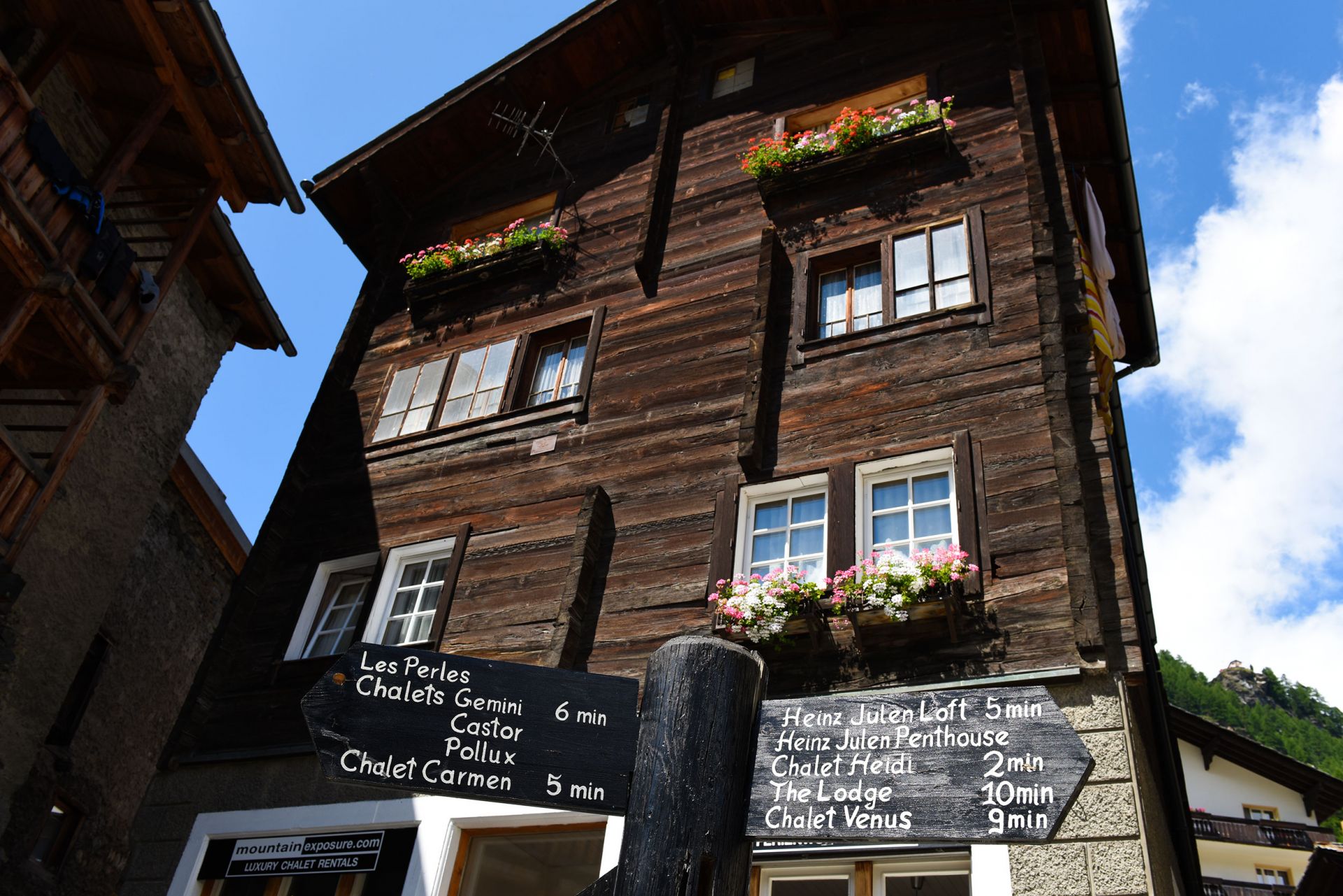 Zermatt is a premier mountain resort, nestled proudly in the heart of Swiss Alps. This amazing car-free Alpine resort in Valais Canton of Switzerland is considered one of the most attractive resorts all over the world. The mountain peaks that reach up to 15,000 feet high surround it.

The town of Zermatt has a relaxed atmosphere due to its small size. There are three main streets, which run along the banks of the River Matter Vispa, and numerous cross-streets, especially around the station and the church, which form the center of Zermatt.

The streets are narrow and lined with shops, restaurants, and hostels near the rail station. The houses are everywhere, some are perched on the lower edge of the mountains mixed with 100 years old wood-hewn beamed walls along with newer buildings and homes.

Most of buildings and homes are chalet-style, some very historic, others more modern, but all blend in with the "Old World" charm and Alpine architecture.

The vacationing village is a real paradise for skiers even during summer, as here is Europe’s highest and largest summer skiing region called “Matterhorn Glacier Paradise”. As well, there are many other majestic sites to enjoy in this mountain area.

The ski slopes are quite easily reached from the village with the underground funicular, which rides at 2300 meters up among a glorious scenery.

This magical wonderland of Zermatt is home to nine of ten highest mountains in Europe. The high altitude guarantees an excellent snow record in a long season, which makes Zermatt special.

Zermatt skiing area is open all year round. Chilling out and enjoying a crazy skiing, surely would be an incredible experience for all kind of tourists.

One can admire not only with winter activities in Zermatt. It is a paradise for skiers and for hikers, climbers or just mountain lovers.

Here is located the symbol of Switzerland and an emblem for Alpinists. Always mystical and majestic: the dramatic Matterhorn is a mountain, which is considered the most photographed in all over the world.

This pyramid shaped and so-called ‘mountain of mountains’ is very difficult and dangerous to climb. The first attempt to climb Matterhorn was made in the year of 1865, as a result costing the lives of four out of seven alpinists. After this incident, the region gained its fame. The succeeding to climb up the mountain became a challenge for ambitious mountaineers.

Nowadays, the visitors are offered to admire the significant panoramic view of the world’s most photographed mountain from 3820 meters above sea level, which is the highest cable car station in the Swiss Alps.

A tour to Zermatt is an experience that one must take. If you are seeking just fresh air, harmony and peace with nature, you will find it all in Zermatt. Also, you will have a close acquaintance with the Swiss folklore and personal with yodellers, traditionally costumed dancers and accordion music.

In Zermatt, you can find everything concerning luxurious vacations starting from helicopter sightseeing flights and ending with winter or summer skiing.

All about Zermatt is breathtaking, which also refers to price ranges, as the vacations or long-term stays in Zermatt are considered to be among the most expensive in Switzerland. However, it is worth to take!